Why You Need Air Vent/Vacuum Relief in Your Irrigation System

Why You Need Air Vent/Vacuum Relief in Your Irrigation System

We do not generally think about air when we are planning an irrigation system, however, it is something to be concerned about. The three main concerns are:

Any of these issues can be resolved with proper installation of air vent and vacuum relief valves. This can prevent damage to important components in your irrigation system.

Trapped Air in a Pressurized Pipeline

How does air get into the pipelines?

In most irrigation systems, the pipelines are full of air when the system is not in use. When your irrigation system shuts down most of the water drains out through the emitters or any auto drain valves you might have installed and is replaced by air. Additionally, pumps can introduce air into the system. Lastly, water itself contains approximately 2% air by volume. The dissolved air comes out with temperature or pressure changes in the system in the form of small bubbles. Turbulence and water velocity increase dissolved air. 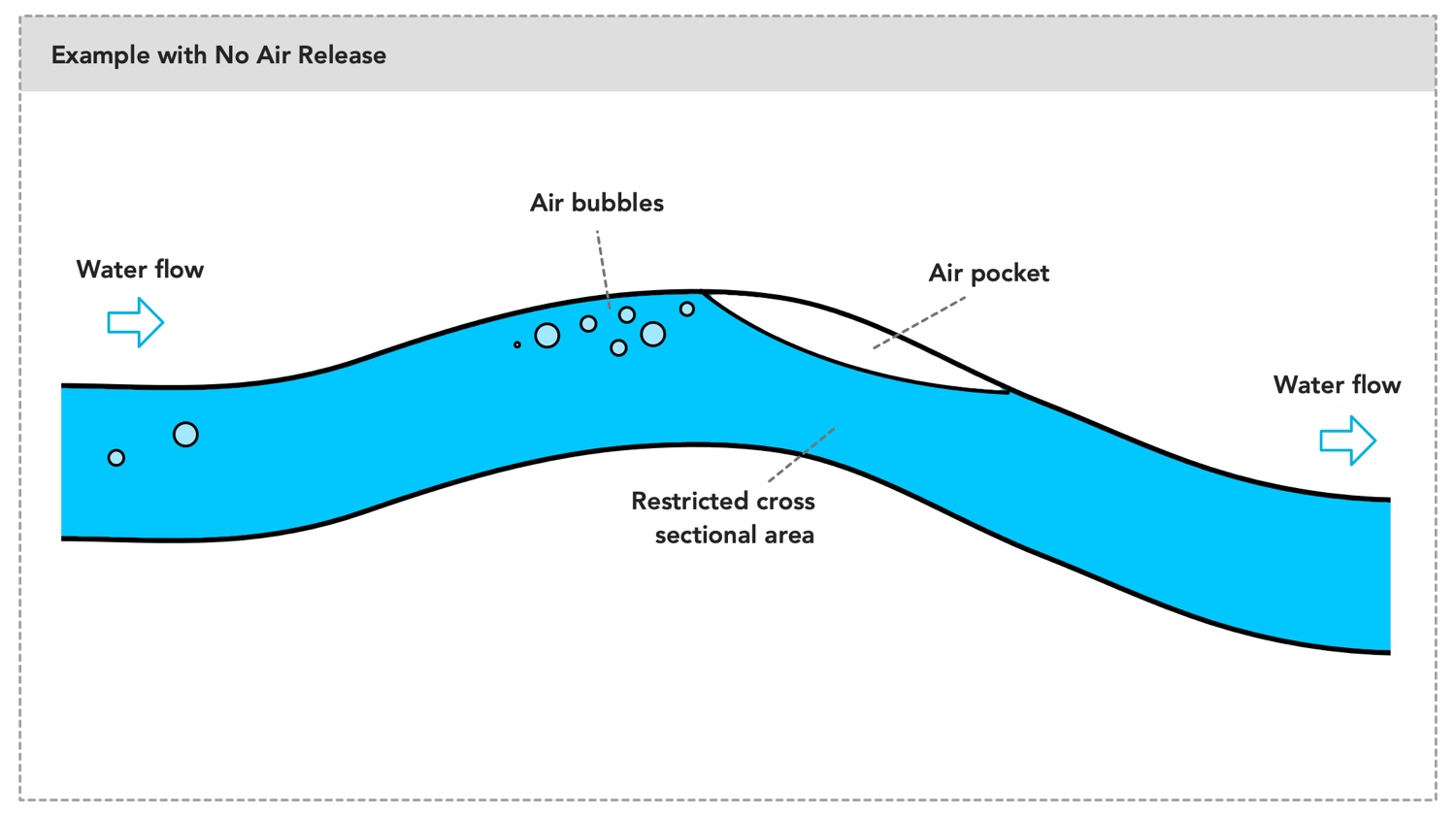 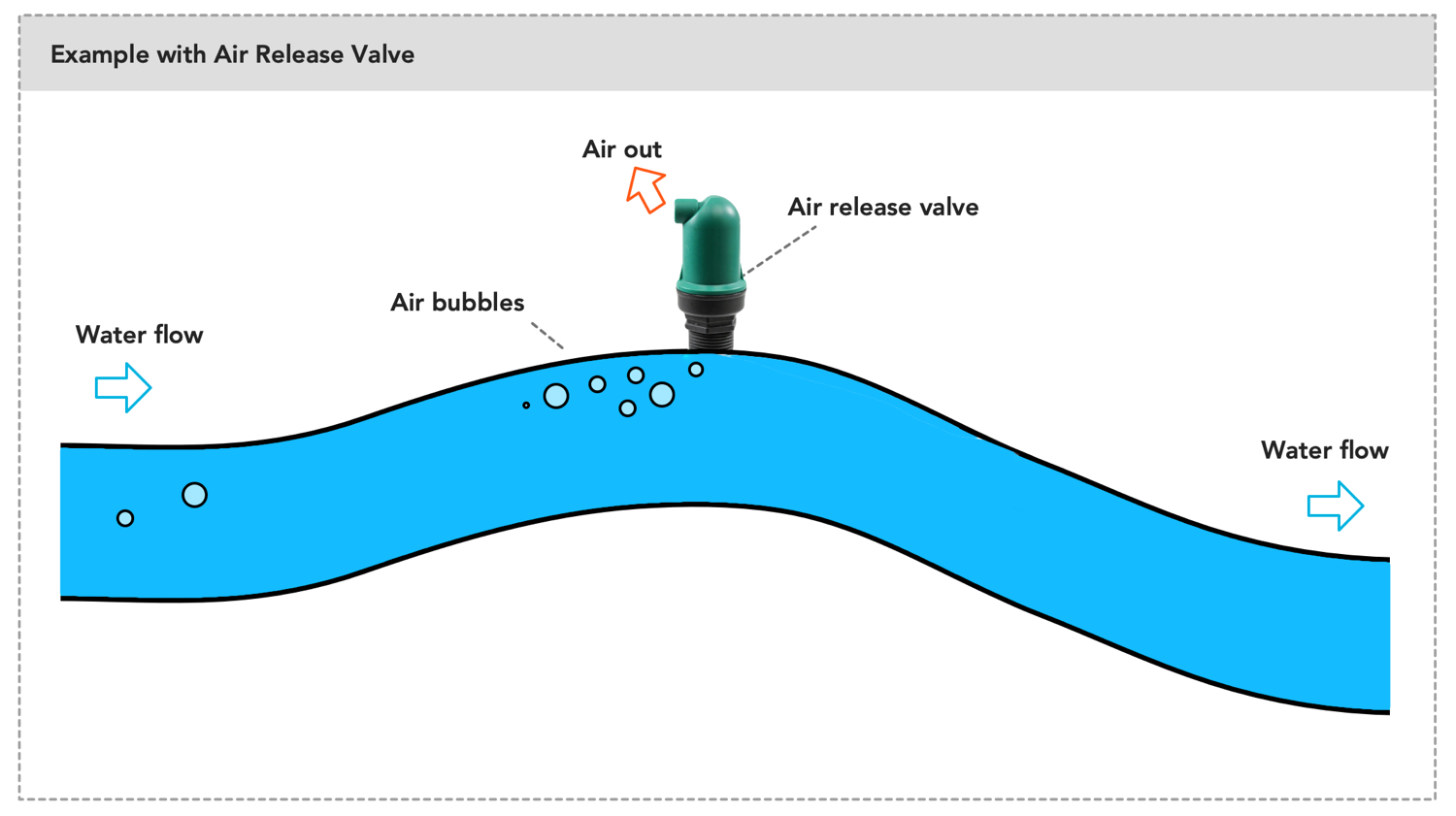 How does the trapped air affect the system?

Water can be 800 times more dense than air, so trapped air is compressed when the system fills, it will accumulate at high points and form air pockets that may cause damage. If an accumulation of air is suddenly dislodged it can cause a surge of water, called water hammer, which has a damaging effect on pipes, fittings and components. Deadheading of the pump is another problem. This occurs when the fluid flow is stopped and the pump impeller continues to turn causing the fluid temperature to rise to a level that can damage the pump. Corrosion from cavitation is also a concern. Cavitation is the forming of bubbles or voids in a liquid that when they implode can cause tiny shock waves which in turn can damage pipe walls and components. Trapped air is especially common in very low pressure systems or in long piping situations where air pockets may restrict or even stop flow if not released.

What are the solutions for preventing entrapped air?

First and foremost is installing air relief or release valves at specific points in your system. These can be automatic relief valves or even hydrants or manually operated valves. Next, minimize the high points or peaks in your layout as much as possible. Keep in mind that water velocity will push air bubbles to the high points so plan your system accordingly especially in low pressure designs. If using a pump, keep suction intake well below water level to prevent siphoning air with the water.

What is a vacuum condition?

Vacuum is defined as a space entirely devoid of matter. A vacuum condition occurs when you remove a substance from its surrounding space and there is nothing to replace it within the space. So if the water drains from a pipe and air cannot be drawn in, at a similar rate, to replace it, then a vacuum condition occurs that can cause pipes to collapse.

How to prevent vacuum conditions.

Installing vacuum relief valves in specific locations within your irrigation system. In this situation, the volume of air intake will equally replace the volume of water drained from the pipes. Vacuum relief also deters suctioning of dirt and debris in through the emitters, thus reducing clogging of your emitters.

The following types of air valves are hydro-mechanical components that automatically vent air into or out of an irrigation pipeline. All three of these valves are normally open valves, often containing a float ball type device that seals against the open orifice when system pressurizes and then drops when internal pressure reaches atmospheric pressure allowing air back into the system.

This type of air valve has a small orifice that continues to release small amounts of air after the system pressurizes and the larger air/vacuum vents are closed. The small orifice size is not usually sufficient for intaking enough air at shutdown to prevent vacuum formation.

This type of valve is often referred to as a kinetic air valve, large orifice air valve, a vacuum breaker and even an air relief valve. These will discharge large volumes of air while the pipelines are filling or pressurizing as well as admitting air back into the system when lines are draining or de-pressurizing. However, they cannot release the small, residual air pockets that form while in operation. The image below shows the process of the Air/Vacuum Valve.

As the name implies, this valve, also known as a double orifice valve, does the job of the other two in a single unit. Allowing large quantities of air in and out when needed, as well as, releasing small amounts of air continuously during operation. The combination air/vacuum valves can be used in place of either of the other types.

Air valves are used on water mainlines and transmission lines, placed at high points in the system; at drip line lateral ends; at grade changes, such as, before and after steep slopes; in long horizontal runs; often before and after isolation or shut-off valves; and on the discharge side of deep well pumps. It is important that the air vents are installed at high points because air rises, and as mentioned above, the velocity of the water will push air to the highest points. The planning may seem difficult, but proper placement is crucial to an efficiently operating irrigation system.

Proper installation is also extremely important. The valves should be installed in an upright orientation only. Normal installation is on the top of a pipe riser of the same size as the valve inlet. In many instances, an isolation (shut-off) valve installed below for easy maintenance.

Matching valve size to the pipe size is standard recommendation for minimum air venting/vacuum relief. For most of our small farm or homeowner irrigation systems with 1” and under pipe, our ½” – 1” air valves are sufficient when matched to pipe size. Most manufacturers recommend 2” and up pipe diameters will require a minimum 2” valve size.

For large or very complicated systems the calculations for determining the correct size, quantity and location of valves for each application can be extremely difficult. We recommend contacting a professional irrigation designer for more technical applications.